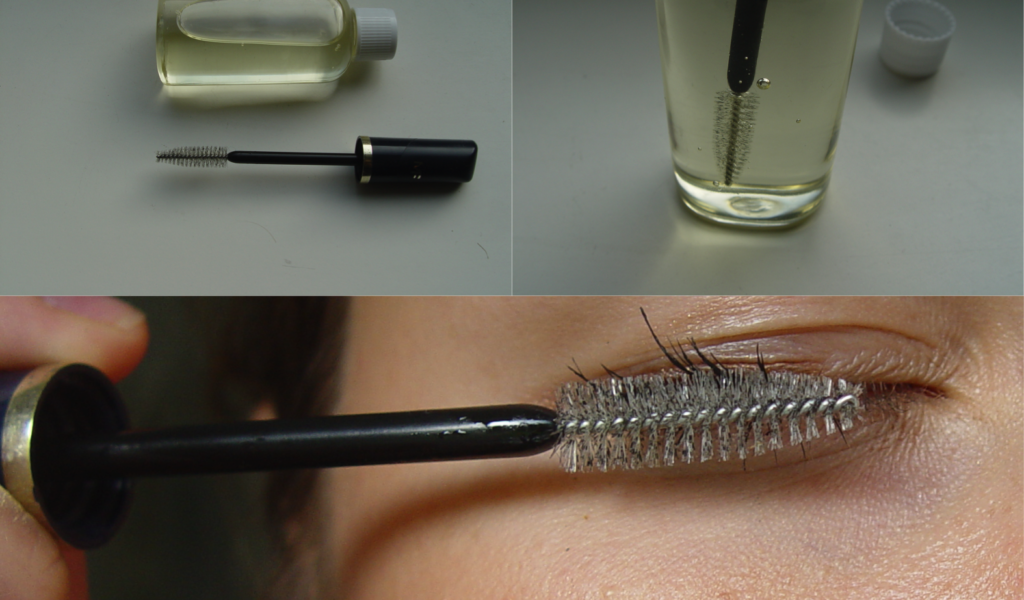 Castor oil is a vegetable oil extracted from the seed of the castor tree.

The fatty acids of castor oil are believed to be highly nourishing to the skin as they trigger hair growth.

It helps get thicker eyelashes and brows.

It also prevents them from breaking and triggers the increase at places where they are not present.

People widely believed that if you have dark, luscious thick lashes, then you are considered to be gorgeous.

Not everybody is lucky to have them. If you missed out having beautiful lashes, there are many natural therapies to achieve them.

One of these natural remedies is the use of the castor oil.

Let us review castor oil and see if it is a good solution for the growth of your eyebrows.

Is castor oil safe for Eyelashes and Eyebrows?

Castor oil has marvelous nutrients. It makes it suitable for treatment of problems commonly caused due to lack of nutrition.

It is a well known anti-inflammatory product with effective mechanisms.

The oil naturally moisturizes and rehydrates the area and makes it easy for the eyelashes and eyebrows to grow faster.

Castor oil penetrates deep into the skin and works from outside to make the eyelashes and eyebrows to grow.

Eyelashes are one of the most underrated but yet essential features on your face. It frames your eye.

Majority of girls use mascara on them to look more defined and darker.

Every girl loves that fluttery and big dopey eyed look.

Not every girl is lucky enough to be born with naturally beautiful long lashes.

There is a wide range of products to help you get that dark, long and thick lashes. But why should you specifically use castor oil?

Please use the organic one as it is the one of the purest stuff.

Castor oil is definitely worth your time because it is affordable and natural. It is also thick and helps skin and hair.

How does it work for the growing and thickening eyelashes and eyebrows?

Castor oil works in two main ways. It prevents the falling off and the loss of eyebrows as well as aid in its growth.

The acid is naturally antifungal and anti-bacterial agent.

Because of this acid, it helps keep any bacteria or fungus from eyelash and eyebrows growth.

The oil is also very thick and helps to prevent hair loss by coating the air and protecting it from falling out.

Castor oil also contains vitamin E and some proteins that are also good for the growth of the lashes.

It helps improve circulation of blood around the eyes which assist in the growth process.

It, however, takes some time, and one needs to be a bit more patient.

It is also what helps to prevent the loss of the eyebrows since they are strong.

It is dark-colored and made from roasted castor beans. Also known as JBCO, it is very rich in fatty acids as well as phytochemicals that are good for dealing with skin issues.

The only difference between the two of them is the processing and the color.

When choosing castor oil for your skin, you should better go for the cold-compressed one as it tends to be purer.

What is the best time to apply Castor oil?

The best time is at night preferably a couple of hours before going to sleep.

You can still use it during the day, but there is a significant advantage in applying it at night.

There is more time for it to saturate and start the process which facilitates growing of lashes at night.

Take precautions to avoid castor oil from getting into contact with the eyes.

If it gets into contact, wash your eyes with water as it may cause severe irritations.

The best place to apply the oil is at the baseline of your eyelashes and eyebrows.

Do not overuse it. Use the best tool to implement it, preferably eyeliner brush.

How to apply the castor oil

Expected side effects of castor oil

Just like most things when used on the skin, castor oil also has some side effects.

When topically applied, it can cause some itchiness and redness caused by the inflammation of the skin.

To some people, it can also cause an uncomfortable rash.

For people who are allergic to castor oil, it can also lead to hives around the area where the castor oil was used though it is not very common.

You can thoroughly cleanse the area using mild soap and some water.

You can apply diluted apple cider to sooth the place.

However, ensure you have tested for allergic reaction (through swipping a little bit over your hand) before you start using castor oil.

This eyelash and eyebrows accelerator boosts of being able to see a 72% of improvement concerning the how long and how full the eyelashes are.

Although it goes by the name lash growth accelerator, you can use this serum on your eyebrows too.

Everyone knows that the eyebrows are what defines the face.

Without a good pair of brows, it is almost useless trying so hard to put on makeup.

Some go for applying eyebrow pencils and eyeliners but what do you think about getting a permanent solution.

The Eye secrets can increase the volume of both of them with the eyelashes appearing fuller and more prolonged.

It is clinically tested not to have any health hazards to the body and even after applying, you will notice that it is not as irritating as most of these products.

It also works by conditioning the lashes and adding some strength to control the breaking of the brittle hair.

In case the damage has been caused by allergies, pulling or use of too much cosmetics or the glue used to stick fake lashes, this serum is able to revive them after a certain period of time usually about 21 days.

Works best when applied at night when going to bed. Its applicator is very easy to use since it works just like the mascara brush.

This eyelash conditioner boosts of helping one to have, but you have to wait for about three to ten weeks before you can see the notable difference.

It is a long time for most people.

It has a very easy applicator which works just like a mascara brush.

You just need to apply a little at the base of the eyelashes every time before going to bed.

T will help you boost of having beautiful natural lashes.

It also works as a conditioner to help condition the lashes and strengthen them against breaking.

Some people who have used it also say that the lashes also appear to be shiner and more flexible.

It is clinically tested, and dermatologists and ophthalmologists have reviewed it and proven to be okay.

It is formed using BioPeptin complex that is the high impact; botanical saturates as well as peptides that help to maintain the moisture around the eyes.

Get it on Amazon here

This growth serum is used to achieve some fuller and longer eyelashes.

It has a peptide complex in its formula which is what can accomplish this.

In case you also have some damaged eye-brows as a result of either over plucking when twisting or when threading it, this serum is able to revive them in no time.

It is meant to target the three stages of hair growth which is why within 60 days of continuous use you are able to see a significant amount of growth.

It helps stimulate the growth of new hairs where there was none which is the reason why they appear fuller.

This lash boost and eyebrow enhancing serum feature a mixture of botanicals and vitamins as well as the peptide complex.

The botanical extracts include the Aloe Vera, White tea, grape seed as well as the mulberry.

It also conditions the lashes and brows.

It is good since it strengthens them and helps to prevent them from being brittle and breaking.

In case you have some color-treated eyebrows, it is also safe to use this serum.

Since it has no residues, you can comfortably use it under the makeup.

Get in on Amazon here

Castor oil is natural oil which is made from the seeds of the ricinum communis plant.

It has some uses on the skin. It contains some vitamin E, proteins and is rich in ricinoleic acid.

It helps in the growth of eyelashes and eyebrows.

It is inexpensive, and you can apply it for fuller eyebrows and lashes.

However, if you want faster results, there is a wide range of accelerators to choose from.

Dr. Saleh is an active author in the beauty & health industry. He is well known for his unprecedented research and advocacy efforts to support safe cosmetic products and healthy way of living.

How to Bleach Your Skin, Fastest Way At Home

What Is a Nano Mister: Hydrate and Refresh! For Skin and Makeup

Fast Overnight Home Treatment to Get Rid of Dark Spots

Top 5 Face Packs That Will Provide You Instant Skin Glow

Why Women Are Not Satisfied With Piona Bleaching Cream?

Registration is free and easy!

Create an account
Or
Connect with:
Login with Facebook
Login with Google
Product added!
The product is already in the wishlist!